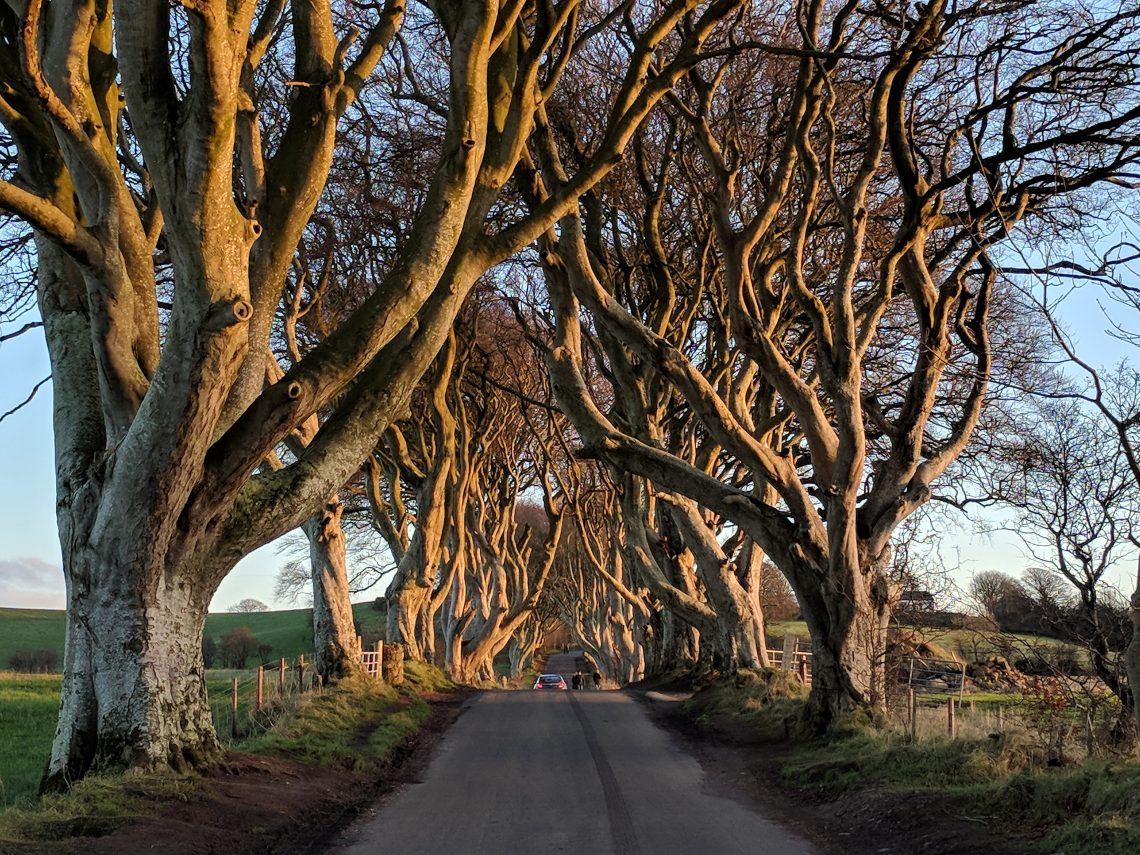 One Saturday in January, we boarded a Dublin Coach bus to Belfast for a weekend trip. The main reason for our journey? Game of Thrones. If you’re a fan of the TV series, then I don’t need to tell you that multiple scenes have been shot throughout NI. We booked an all-day bus tour with McComb’s for Saturday, and Sunday morning was to be spent in Belfast. (Spoiler alert: If you’re not past the first few seasons of GoT, you probably want to stop reading now.)

Now I’ll preface my post with an admission: I hate (most) tours. We booked this one mainly because we didn’t want to bother with renting a car or researching the shoot locations. Our tour was great in that we got to see so much in nine hours, but at the same time, we found that we simply didn’t have enough time at most stops (such is the problem with most tours!).

We left Belfast and drove through the Glens of Antrim. As expected, lots and lots of greenery, cows, and sheep were seen. Think quintessential Irish countryside. 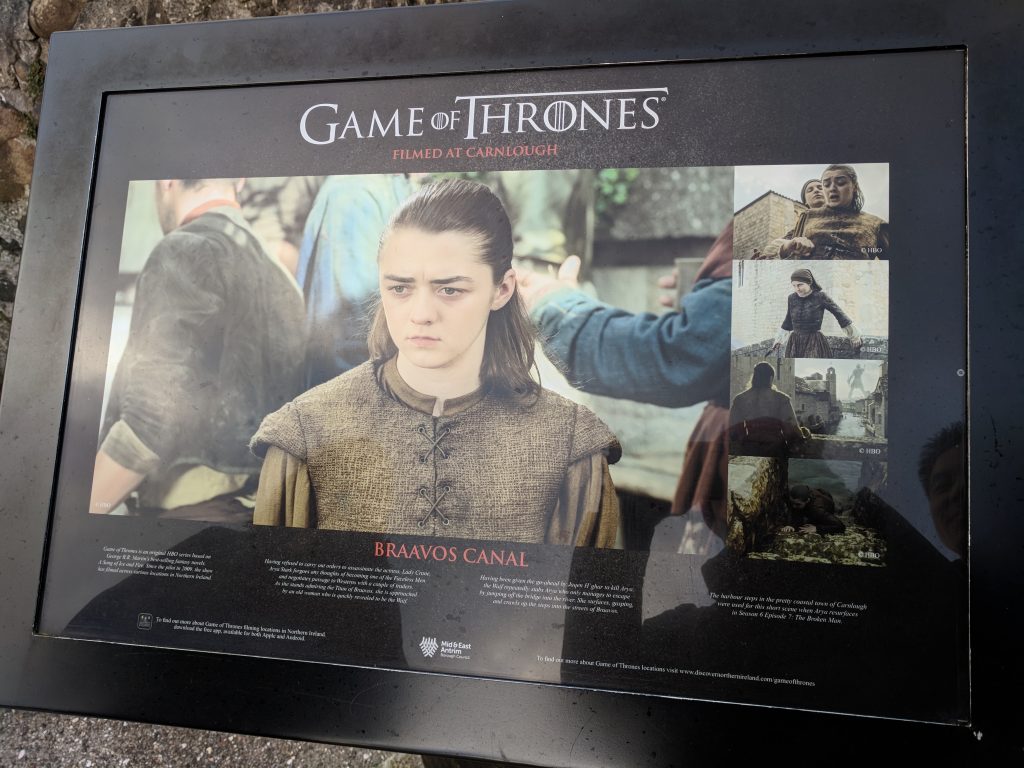 This was our first GoT stop. The Lough is where Arya Stark emerges from the water after being stabbed by the Waif in episode two of season six. Our guide told us that the actual stabbing scene was filmed in Spain, but Carnlough served as Braavos Canal, where Arya pulled herself up these steps, stomach bleeding.

We spent about 20 minutes here before driving through Glenariff, Waterfoot Village, and Cushendall, which is the largest village of the Glens.

PRO TIP: If you’re riding along the coast on a bus tour, try to get a seat on the right side so you have a direct water view.

Ballintoy Harbour is probably the most significant spot on this tour for a Game of Thrones fan. It’s been featured in several episodes and is best known for being the backdrop of the Iron Islands. It also served as Dragonstone in an episode in season 4.

A memorable scene here is when Theon arrives and is introduced to a woman whom he wants to bed, but then subsequently discovers is his sister, Yara (yikes).

The bus dropped us off at the top of a hill. It was a good 10-minute walk down to the actual harbor, so it was a bit frustrating that in total, we had about 35 minutes there—more than half of that time was spent walking to and from the bus! (Tour buses aren’t allowed to drive closer to the harbor. The road itself is pretty narrow and residents live along it.) It’s a very peaceful and secluded location where you can get up close to the crashing waves and sea spray.

Carrick-a-Rede is one of Northern Ireland’s most popular attractions. This particular bridge wasn’t in Game of Thrones, but it may remind you of Balon Greyjoy’s death scene. If you have a severe case of acrophobia, this attraction likely isn’t for you. (Our bus tour didn’t include the price of admission for the bridge, so there’s no pressure for you to participate if you don’t want to. We paid for the bridge admission in cash to our bus driver at Carnlough.)

To hurry things along, there are workers on both ends of the bridge whistling at you if you take too much time to cross. I believe no more than seven people are allowed on the bridge at any one time, so standing in the middle for a while to snap that perfect selfie is frowned upon.

There’s one way to walk to the bridge and a slightly different way back to the car park. On the way back, you walk up a hill. Be sure to turn around to get a stunning view of the sea and the bridge.

We had lunch at this pub in Ballintoy. Typical Irish food on offer in a restaurant with its own GoT-themed dining room. It also has one of the 10 Doors of Thrones and a replica iron throne. I enjoyed a seafood chowder, while Steve had a burger.

This natural UNESCO attraction isn’t featured in Game of Thrones, but it’s practically synonymous with Northern Ireland. The columns of hexagonal stones are a true natural wonder, and legend has it that they formed a causeway created by an Irish giant named Finn McCool when he agreed to fight Scottish giant Benandonner.

We arrived around 2 p.m. and it was so crowded with tourists. The scenery is gorgeous and unique, but our experience would probably have been better if we visited earlier or later in the day (it’s accessible 24/7). I’d recommend visiting Giant’s Causeway outside of a tour if you can.

The Dark Hedges is a street lined with centuries-old trees that served as Kingsroad in Game of Thrones, and it was the final stop on our tour.

I’m sure you’ve encountered images of these majestic, eerie beeches in a number of travel articles, or any posts related to Game of Thrones. I, for one, had seen them all over my Facebook feed.

It can be difficult to get a decent photo, simply because The Dark Hedges have become such a popular destination. When we were there, there were people everywhere (not just us tour bus folk!). Also, even though there is a vehicle ban in place, it doesn’t seem to be enforced (we didn’t see any police) so cars continue to drive through this tunnel of trees.

Since we did this tour in the winter, a couple of stops were removed simply because there wasn’t enough daylight (the sun set around 4 p.m.). The Cushenden Caves (where Melisandre gave birth to a shadow baby) and Larrybane Quarry (Renly Baratheon’s camp) were cut from our tour.

After the tour, we dined at Moghul, an Indian restaurant. The service here was some of the best, most attentive we’ve ever received at a non-fine dining establishment. Our server was pleasant, and the food was fantastic (we had our go-tos: chicken tikka masala and garlic naan). We were even given complimentary glasses of champagne at the end!

We spent the following morning at St. George’s Market in Belfast city center. After queuing for about 30 minutes for breakfast, we feasted on these gigantic baps from Belfast Bap Co.

St. George’s is a great place to spend a morning or afternoon (note: it’s only open Friday–Saturday). It’s indoors, so it’s perfect especially if the weather is shite. After enjoying some live music and perusing the stalls, it was time to catch our bus back to Dublin. We hope to return to Belfast soon for another weekend trip to explore more of the city itself. 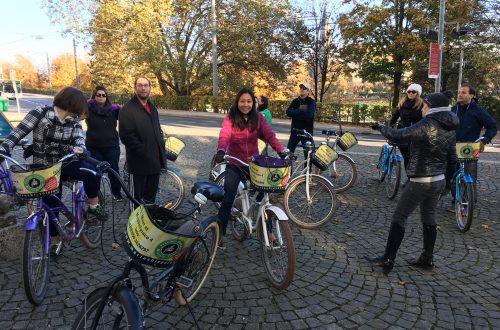 The Most Epic Sound of Music Bike Tour 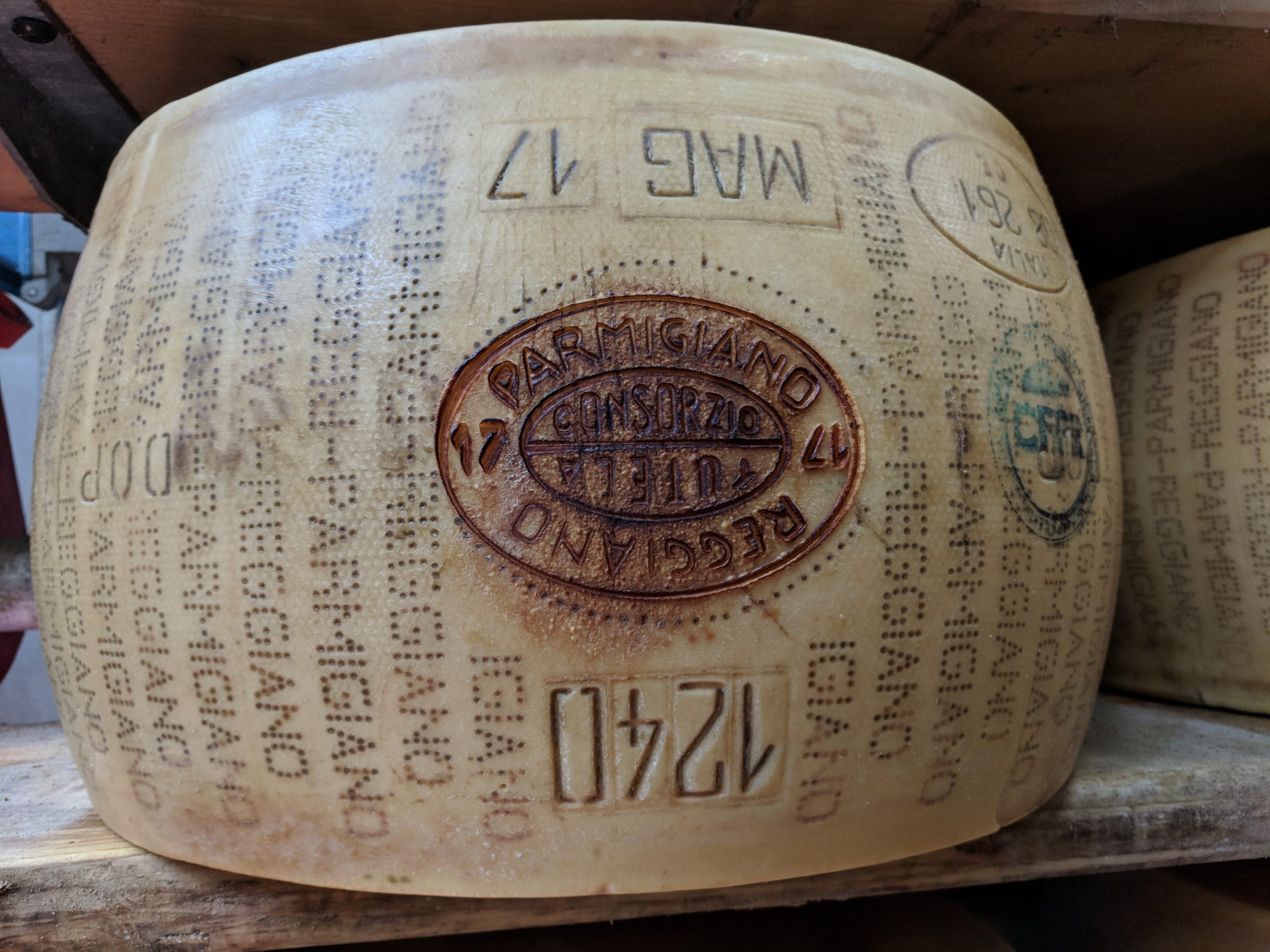 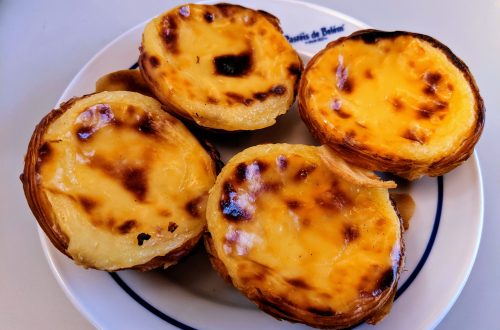